Before photography was understood, people gave it supernatural powers

Posted on March 23, 2012 by hudsonhousemysteries 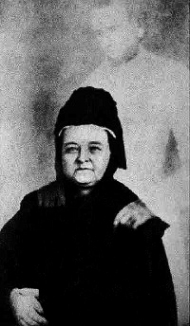 Above: Mary Todd Lincoln with

the ghost of her husband.

Do you know why all the victims of Jack the Ripper were photographed? At least partially because of an article in the British Journal of Photography which said that the last thing a person sees will be permanently imprinted on their eyes. It was hoped that photos of the victims’ eyes would help identify the Ripper. This will give modern readers some idea of how supernatural photography seemed to Victorians. It’s easy to look at certain examples of “spirit photography” and smile, but photography was only a small step removed from the supernatural.

It was not by accident that William Henry Foxe Talbot, the inventor of the negative/positive photographic process, titled the publication he issued to publicize his discovery The Pencil of Nature. The implications of the title were spelled out in a newspaper advertisement for the second part: “The Plates of this work are all ACTUAL PHOTOGRAPHS, and not, as some have supposed Engravings in Imitation. They are formed and impressed upon the paper by the action of light alone; and therefore do not require in the operator any knowledge of the art of drawing.”

Many people at this time thought that photography had something sacred about it. It enabled God to speak directly to human sensibilities, without the need for mortal intermediaries, who might distort the message. So it is not hard to understand that photography had something of the numinous about it in its earliest days. This fit in exactly with the Metropolitan Force’s desperate need to identify Jack the Ripper. Not only were the killings horrific in a new and widely publicized way, but some of the crimes were committed at a time and place where it was known that police were within a block of the crime. Some people wondered if Jack the Ripper was, himself, supernatural.

Real magic is actually the workings of science, a science whose principles are not yet known to man. This is exactly what photography was in the mid-1800s. Even today, photography can  produce apparent miracles. If a photographer knows how to use a large format camera of the kind common during the early years of photography, what is now called a view camera, it is possible to photograph a mirror and have no photographer or camera appear in the image. To some people, even today, this would seem a kind of magic.

I am a graphic artist. My work is based on photography and I am also a writer of historical novels, specializing in the Victorian era with a strong emphasis on the historical connections between that time and this.I began writing by working with my late father, Alvin Schwartz, who wrote Superman and Batman comics for more than twenty years. Starting very early, about age six, I plotted comic book stories then moved on to writing film, advertising and fiction ranging from young person’s novels to my current historical novels http://hudsonhousemysteries.com/south.php. In addition to telling a good yarn, I like to use an historical perspective to comment on modern issues. I learned about art from my mother who was one of Hans Hofmann's students and had one of the last show at Peggy Guggenheim's in NYC. I have had one man shows in Montreal and Toronto. My art website is Alan McKee.com.
View all posts by hudsonhousemysteries →
This entry was posted in 19th century British Journal of Photography, 19th Century clairvoyance, 19th century photography and photographic techniques, spiritualism, spiritualistic phenomena, spirit photography, Jack the Ripper, spiritualism, victorian, 19th century, Jack the Ripper, the Raj, victorian child prostitution, 19th century virtuosi, The National Railway Museum, Josephine Butler, and tagged 19th century photography, British Journal of Photography, clairvoyance, Henry Foxe Talbot, Jack the Ripper, spirit photography, William Mumler. Bookmark the permalink.